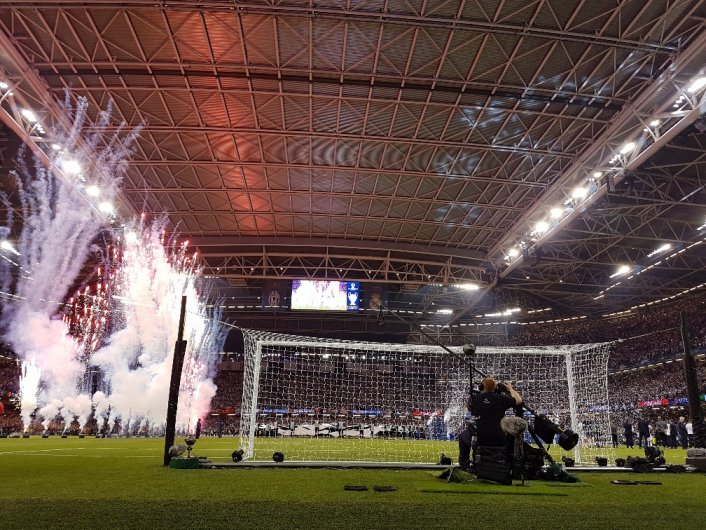 Running since 1967, the IBC Show is “by the industry, for the industry” and is a crucial event in the calendar of broadcast and media professionals worldwide. IBC2017 conference was held 14-18 September with our client BT Sport being nominated against tough competition for a prestigious award.

The IBC Awards celebrate the personalities and the organisations best demonstrating creativity and collaboration. Presented in a lively and fast-moving celebration during IBC, the IBC Awards showcase some of the most exciting and stimulating content from the year.
The nominees in the category for Innovation Award for Content Everywhere were our client BT Sport for Champions League Final 2017, alongside ESL for Global IP contribution/distribution, Google for Google Earth VR and Renfe Viajeros for PlayRenfe.

Aerial Camera Systems (ACS) was contracted by BT Sport as Host Broadcaster - to exclusively deliver HD and UHD specialist cameras for the Champions League Final in Cardiff on 3rd June 2017.
This included the provision of a 4K broadcast which involved 12 dedicated UHD cameras; 7 of which were provided and operated by ACS. This was a first for ACS and for the event, but our extensive research and development, followed by meticulous planning resulted in a faultless technical delivery by the ACS team onsite, as well as pioneering new ways our specialist cameras can deliver UHD/HDR coverage. Our recent blog article, gives more detail about the live 4K aerials, railcams, polecams and SMARTHeads™ used for this project.

The BT Sport filming nomination included a raft of wold first innovations as detailed on the IBC website, and below:

The Innovation Award for Content Everywhere was won by BT Sport.

BT Sport were awarded the Innovation Award for Content Everywhere. Chief Operating Officer Jamie Hindhaugh said: “We are absolutely delighted to win this coveted award, our huge thanks to IBC and the judges for recognising the incredible effort and game changing innovation that BT Sport and our partners delivered at this year’s UEFA Champions League final in Cardiff.
”We are very proud that our unique partnership approach allows us to consistently drive high quality technical and editorial innovation that is aligned with our strategic vision to be at the heart of sport.
”We extend our gratitude and congratulations to all of our partners with whom we share this award. The Champions League final is the pinnacle of domestic football and UEFA are an amazing rights holder to work with and so, of course, our thanks go to them for all their support.”
Aerial Camera Systems (ACS) have enjoyed working with BT Sport and would like to congratulate them on their well deserved award.
For more information on working with Aerial Camera Systems have a look at our website or contact us <to find out more about our services such as our aerial cameras, 4K aerial filming, helicopter mounts and drone filming or our very special EyeFlyer blimp.