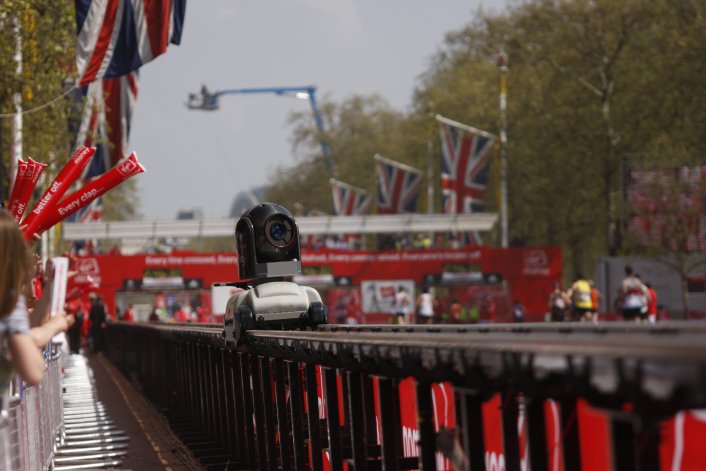 It was announced last month that The Queen would be the official starter of the 2018 London Marathon. From the grounds of Windsor Castle, the Queen stepped onto a special podium to push the start button at 10am.
Elite wheelchair athletes set off first at 8.55am, followed by the World Para Athletics Marathon World Cup ambulant races at 9am. The elite women’s race started at 9.15am, while the gun for the elite men was at 10am. The main body of the race continued on after these.
Such a huge event deserves plenty of filming, so live coverage was available on BBC TV, HD, Red Button, 5 live sports extra, BBC Radio London, online, mobile, the BBC Sport app and Connected TV.

ACS Filming at the London Marathon

This year the unseasonal mini heatwave resulted in the hottest London Marathon on record - with mid temperatures of 24.1C (75.3F) recorded in St James's Park.  The race organisers had issued runners with warnings about wearing bulky costumes and distributed four-and-a-half litres of water per person - more than any other mass participation event in the world.
Prior to the start Mo Farah was Britain’s big hope in the elite men’s race. But the Olympic star, who has made the move from track to marathon, was up against 2017 winner Daniel Wanjiru and long-distance legends Kenenisa Bekele and Eliud Kipchoge. On the day Olympic champion Eliud Kipchoge came first in the men's elite race to win his third London Marathon title, with Mo Farah finishing third and setting a new British record of 2;06:21.
Vivian Cheruiyot of Kenya won the women's elite race - recording a personal best time of 2:18:31 and David Weir won his eighth London Marathon title in a thrilling sprint finish.

If you would like to find out more about our specialist cameras and crews then please take a look at our website or get in touch.