ACS Specialist cameras and filming at the Cheltenham Festival 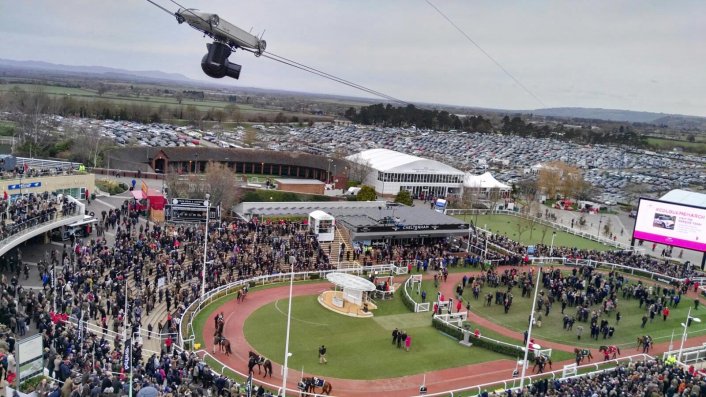 The Cheltenham Festival was held this year from 13-16th March in Gloucestershire. It’s the biggest meet of the racing calendar – with four days packed full of high-class racing, with some of the biggest names of the sport. Aerial Camera Systems (ACS) were there to film the action.

The Festival always starts with the famous Cheltenham roar, the longstanding tradition embraced by all, signifying that the battle has commenced. Three race packed days build up to Gold Cup Friday, when the crowds reached a sell out 70,000.  Aerial Camera Systems (ACS), were there on behalf of our client ITV Sport to capture everything from the glamour of ladies day to the fast paced racing action, including the thrilling Gold Cup race.

This year more than £4.6million worth of prize money was on offer – a record for the festival. Therefore, a record number of viewers were expected to tune in to watch the racing action. Aerial Camera Systems (ACS) captured shots around the parade ring, tracked the racing along the course with our tracking vehicles and delivered an aerial view of the action using our unique EyeFlyer blimp sponsored by Betvictor.

The going at Cheltenham on the eve of the Festival was heavy, soft in places – but this proved to be no problem for our Tracking Vehicles.  ACS supplied the CAMCAT Colibri Wirecam fitted with our GSS 512 stabilised mount with Grass Valley camera which travelled above the Parade Ring. Two of our Tracking vehicles fitted with stabilised mounts followed the horses around the course and the Bet Victor EyeFlyer captured the action from the air using an HD Cineflex V14 stabilised mount.

Viewers were able to watch every minute of the Festival live on ITV Racing. Coverage ran throughout each of the four days, starting in the morning and running through to the final races at 5.30pm.
Coverage included the Betway Queen Mother Champion Chase, in which the outstanding Altior recorded a third successive win at The Festival and confirmed his status as the best two-mile chaser in training.
The whole of the Festival builds towards the jewel in the crown, the £625,000 Timico Cheltenham Gold Cup. Chasing the blue riband event always provides a tremendous spectacle. This year the race was all about the memorable battle between last year's third-placed horse Native River and King George VI Chase winner Might Bite.   Native River won after a thrilling Cheltenham Gold Cup duel with Might Bite.
Aerial Camera Systems (ACS) provided filming services over the whole of the 4 day event at Cheltenham. The opening races take place on Champion Day, followed by some great racing highlights, such as the Champion Hurdle on Tuesday, Wednesday was the Queen Mother Champion Chase, Thursday was The Stayers Hurdle and Friday The Gold Cup.
Aerial Camera Systems (ACS) were proud and excited to be experiencing an exciting few days at this prestigious event, filming a colourful spectacular – what a fabulous filming (and racing) experience. If you'd like to find out more about our specialist filming services, please get in touch via our website.