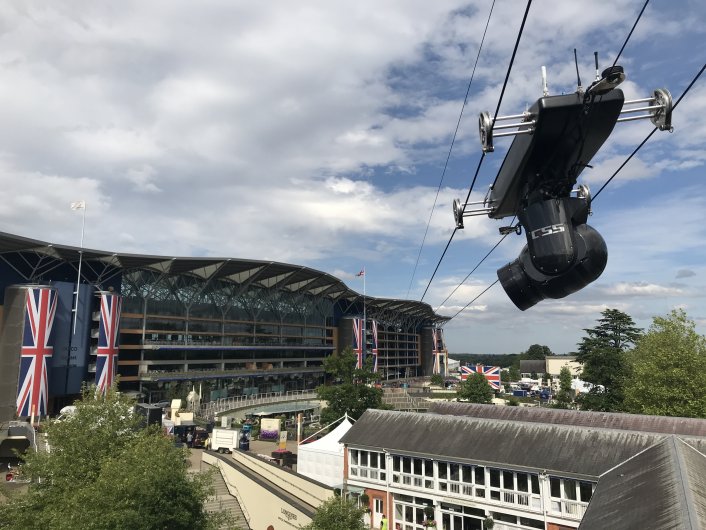 Over this summer the specialist cameras and crew of Aerial Camera Systems (ACS) were involved in some of the most glamourous and prestigious racing events in the sporting calendar including Royal Ascot and the Goodwood Festival.

The Aerial Camera Systems (ACS) specialist cameras and crews were heavily utilised at Royal Ascot, including:
Two wirecam systems were deployed: one offering shots of the horses racing in front of the grandstand and the other showing dramatic shots tracking through the parade ring and the action below.  The systems were fitted with one of the latest additions to ACS gimbal inventory; the brand new Cineflex Pro with Sony HDC P50 camera as well as a Cineflex V14 fitted with a Sony 2500 camera.
The ACS tracking vehicle fitted with a Shotover mount was there to track the horse around the course and the ACS remote head; the SMARThead™ was also on site.

For Glorious Goodwood we supplied the Qatar Airways EyeFlyer as well as the ACS  tracking vehicle.  The EyeFlyer from ACS is a helium filled sponsor branded aerostat often referred to as a ‘blimp’ that is tethered to a ground station trailer on or near the location of the event.
As a camera platform, the EyeFlyer offers a unique aerial view for live broadcast whilst at the same time, delivering an exceptional branding opportunity to the venue below.

Royal Ascot took place from Tuesday, 18 to Saturday, 22 June - Ladies' Day was held on Thursday, 20 which was also when the prestigious Gold Cup took place. The historical race dates back to 1807, and it’s Ascot’s oldest surviving race.
During the five days of racing the Aerial Camera Systems crew covered all the action including highlights such as:
• Frankie Dettori sealed his first top jockey title at the Royal meeting since 2004.
• Blue Point making Royal Ascot history with a sprint double
• Space Traveller sprang a 25-1 shock as he beat favourite Space Blues in a thrilling finish to the Jersey Stakes

The Goodwood Festival is a five-day horseracing event that takes place in late July/early-August each year and is one of the highlights of the flat season. Held at Goodwood Racecourse, Chichester, Qatar ‘Glorious’ Goodwood Festival this year was held over five days on the 30th July ¬– 3rd August 2019.
There was a great mix of races at the Qatar ‘Glorious’ Goodwood Festival, with the Goodwood Cup (Day 1), the Sussex Stakes (Day 2), and the Nassau Stakes (Day 5) the stand out Group 1 races, while the Qatar Stewards’ Cup handicap race on Day 5 is one of the favourites to bet on as outsiders tend to do well.
Arguably the most glamorous day of the festival, Day 3 is Ladies’ Day with the ladies’ amateur jockey race, the Magnolia Cup, a highlight. ACS specialist cameras and crews captured all the results across the five days.
Whilst the Aerial Camera Systems team love to capture the horse racing action, we also have expertise in filming a multitude of sporting events, in addition to major state occasions, live music and blockbuster movies. To find out more about our project work have a look at our website or get in touch with one of our team.