ACS filming at the Asian Games in Jakarta 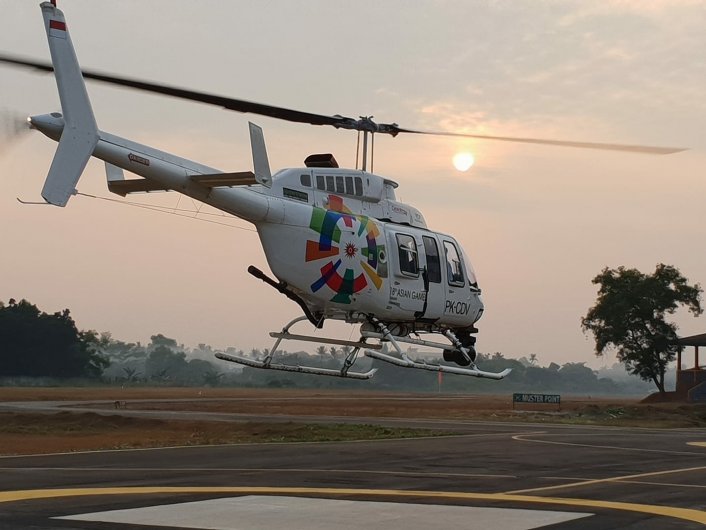 The Asian Games, also known as Asiad, is a continental multi-sport event held every four years among athletes from all over Asia.

The most recent games were held in Jakarta and Palembang, Indonesia from 18 August to 2 September 2018, and Aerial Camera Systems (ACS) were there to film the sporting action.

Working for host broadcaster, International Games Broadcast Services (IGBS), with sister company CTV Outside Broadcasts, ACS were proud to be part of the Euro Media Group team that were delivering coverage of the Games. Our specialist crew were operating our tracks at the Opening Ceremony and the Athletics. This included a 100m track with HD Cineflex V14 stabilised mount and our Vertical track used to cover the field throws. The ACS SMARThead™ remote heads were used to cover the athletics, aquatics and the gymnastics.
In addition to remotes and tracks, our award winning aerial unit provided all aerial coverage of the Games, including the Cycling events and Marathon, using HD Cineflex V14 stabilised mounts and links provided by sister company Broadcast RF.

This year was the 18th Asian Games. Venues for the 2018 Asian Games were divided into four clusters, located in South Jakarta, North Jakarta, Jakarta’s suburbs and in Palembang. Since the 1982 Games, they have been organized by the Olympic Council of Asia (OCA).
The Gelora Bung Karno Stadium hosted the athletics and the Opening and Closing Ceremonies for the 2018 Asian Games.
The next games are scheduled to be at Hangzhou, China between 10 and 25 September 2022.
If you would like to find out more about our specialist cameras and crew used at the 2018 Asian Games, then please get in touch.
Alternatively, have a browse of our website to find out more about our aerial cameras, Inspire 2 drone, rails and wires, tracking vehicles, SMARTHead remote cameras, minicams or our unique EyeFlyer Blimp.