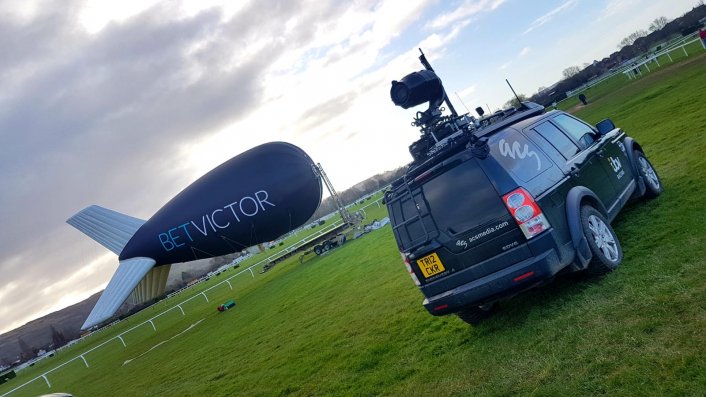 Despite the current climate, the Cheltenham Festival went ahead last week and saw racing fans flocking to Prestbury Park for one of the biggest weeks in the racing calendar. Over the course of the four day meeting, 28 winners were crowned, none more prestigious than in Friday’s Gold Cup.

Aerial Camera Systems (ACS) provided coverage of the racing action for ITV Racing. Two ACS Land Rover tracking vehicles were tracking alongside the horses covering all the action on the course. One tracker fitted with a Shotover F1 with Sony HDC P1 and the other with an HD Cineflex stabilised mount. Driving one of the trackers and heading up ACS’ provision on site was GTC award winner, Nick Murray. In addition to the trackers was the parade ring wirecam, delivering great shots of the action in the ring below. Fitted with our latest stabilised mount; the Cineflex Pro which is fitted with Sony HDC P1. Also, flying above the racecourse was the ACS EyeFlyer blimp. Sponsored by Betfair the EyeFlyer (eyeflyer.tv) had a bird’s eye view of the racing below, delivering all the drama from Gold Cup day to ITV Racing.

What is Cheltenham Festival

The Cheltenham Festival is a meeting in the National Hunt racing calendar and takes place annually in March at Cheltenham Racecourse in Cheltenham, Gloucestershire. It features several races including the Cheltenham Gold Cup, Champion Hurdle, Queen Mother Champion Chase and Stayers’ Hurdle, held over four days.
Cheltenham is often noted for its atmosphere, most notably the "Cheltenham roar", which refers to the enormous amount of noise that the crowd generates as the starter raises the tape for the first race of the festival.

Highlights of the Cheltenham Festival

There’s always so much excitement and lots to see at Cheltenham Festival. But there was something of everything this year, highs and lows, smiles and tears (often in combination), terrific horses, close finishes, drama and a succession of great human interest stories.
History was made in Magners Cheltenham Gold Cup 2020, when 68,000 racegoers roared home Al Boum Photo in the 3.30pm feature race. For the second consecutive year, Willie Mullins is taking home the Magners Cheltenham Gold Cup, ridden by Paul Townend. Al Boum Photo became the first back-to-back winner of the £625,000 G1 Magners Cheltenham Gold Cup since Best Mate (2002, 2003 & 2004) with an electric success in Jump Racing's Blue Riband event.
Gold Cup Day is an iconic event on every sports fans bucket list. The Gold Cup is the flagship event of the Cheltenham Festival - it is jumps racing's ultimate test of speed and stamina. The Gold Cup is the prize race on the final day of the Festival, which was Friday March 13 this year.
The Festival™ presented by Magners 2021 will run from 16 - 19 March. Official tickets will go on sale in due course.
If you’d like to find out more about our award winning cameras and crew, or how we can help on your next sports filming project then please get in touch or visit our website.