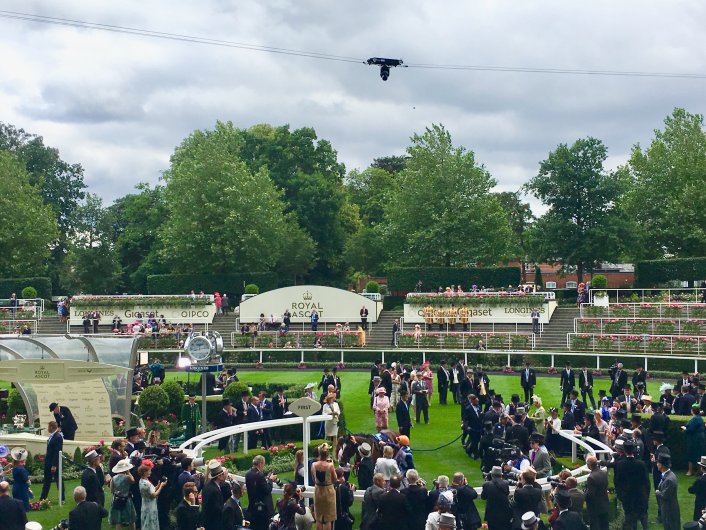 Royal Ascot is Britain’s most valuable race meeting, attracting many of the world’s finest racehorses to compete for more than £7.3m in prize money. Each year it is broadcast to millions around the globe, and Aerial Camera Systems (ACS) were there to film the horse racing action.

Ascot racecourse boasts a rich and famous history after it was founded in 1711 by Queen Anne. Although the Berkshire track hosts events throughout the year, Royal Ascot is the pinnacle of these.

Royal Ascot 2018 was held from Tuesday 19 – Saturday 23 June 2018. 30 races were scheduled across five days of action opening with the Queen Anne Stakes, named after the founder of the racecourse.
The Queen has attended every Royal Meeting during her reign and is introduced to the thousands in attendance by a horse-drawn carriage with the Royal procession taking place at the start of each race day, The procession is closely monitored by the ACS tracker vehicle following alongside to capture the Queen and her guests.

Royal Ascot is an occasion for dressing up and even has its own dress rules and style guide which was launched to offer inspiration and clarification on the rules.

With 5 days of racing coverage, the Aerial Camera Systems (ACS) team were out in force with our specialist cameras and crews for ITV Racing. This included the following:
Two wirecam systems; one offering a shot of the horses racing in front of the grandstand and the other showing dramatic shots tracking through the parade ring and the action below. Systems were fitted with HD Cineflex stabilised mount and GSS stabilised mount. The ACS tracking vehicle was also there, keeping up with the horses racing around the track and ACS also supplied a SMARThead™ remote head.
TV coverage of the horse racing at Royal Ascot was available on ITV and Racing UK. Over 300,000 people visited the racecourse and the viewers at home were treated to an exemplary five days of uninterrupted coverage of all 30 races on ITV.

The going was reported as Good to Firm. With so many horse races and action over the five days it’s difficult to report all the highlights. However, these would be our top two:
For a full run down of the racing results, and more details of all the action that was captured on film have a look here: https://www.ascot.co.uk/race-results
Already avid Royal Ascot fans are eagerly awaiting the ticket details for 2019's Royal Ascot - which will be announced shortly.
From the world famous Gold Cup to the Royal Procession, a trip to Ascot is a must for all race fanatics. If you’d like to learn about how the ACS specialist cameras and crews can assist with your next filming project, then please visit our website.
Royal Ascot continues to attract the world's best horses from around the world to compete for a shot of glory. Aerial Camera Systems specialist cameras were at Royal Ascot to capture it all, as we have done for many other world famous sporting events.  Just take a look at our showreel to see some examples of our fabulous work.