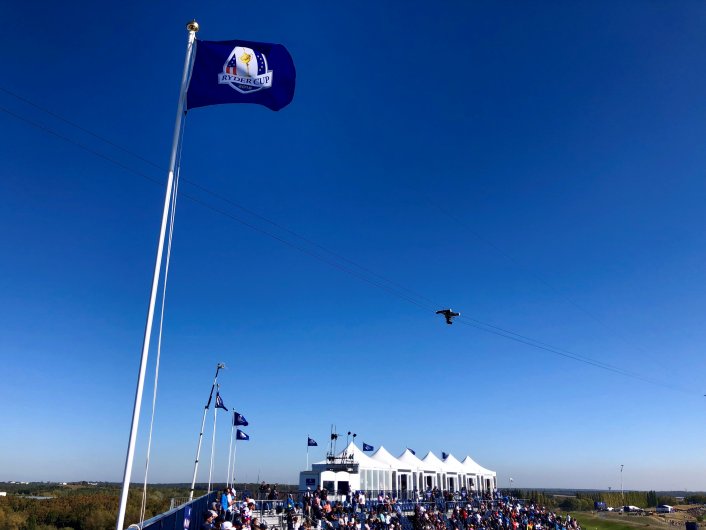 Aerial Camera Systems (ACS) were at Le Golf National in Paris to capture the golf action and celebrations, culminating in Rory McIlroy and his Ryder Cup-winning team-mates basking in the success of their victory over the United States on Sunday.

What is the Ryder Cup?

This year, the 42nd Ryder Cup Matches were held in France from 28–30 September 2018 on the Albatros Course of Le Golf National in Guyancourt, a suburb southwest of Paris. It was the second Ryder Cup to be held in Continental Europe, after the 1997 contest, which was held in Spain.

For the sixth straight time, Europe won the Ryder Cup on its home soil. The Americans remain winless on European soil since 1993, with Europeans having now won seven of the last nine events, dating back to 2002.
Captain's Thomas Bjorn's team topped the U.S., 17 1/2 to 10 1/2, on Sunday. Francesco Molinari locked up the clinching point when Phil Mickelson hit his tee shot in the water at the par-3 16th and conceded the match to The Open champion, 4 and 2, while still on the tee.
Molinari became the first European player in history to go 5-0-0 in a Ryder Cup, as the senior leaders of the U.S. team, Mickelson and Tiger Woods, combined to go 0-6-0.

What did ACS do at the Ryder Cup?

There were celebrations, tears, and one player dressing as a pillar box! ACS were there to capture all the action at the 2018 Ryder Cup.
Aerial Camera Systems (ACS), had been planning their attendance at the 2018 Ryder Cup for nearly a year. With complex terrain and logistics to contend with, ACS supplied a crew of 15 for the duration of the golf tournament.
Working for European Tour Productions (ETP), ACS provided and operated a whole host of specialist cameras, including:
ACS also provided 2 x SMARThead3™ remotes heads with a canon box lens adaption and Sony P1 cameras to sister company CTV for The Golf Channel.
The specialist cameras and crews were able to capture all the highs and lows of the three days of top class golf at the Ryder Cup. If you would like to find out more about our cameras, award winning crew, or to find out how ACS can enhance your next filming project, then please get in touch or visit our website.