ACS Filming at BBC Sports Personality Of the Year 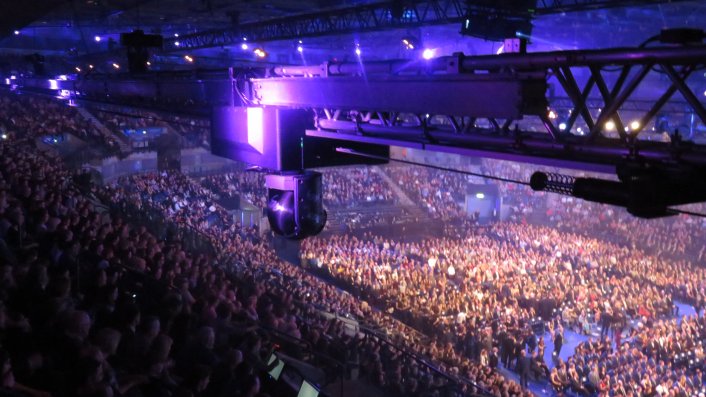 The star studded event was held at the Echo Arena, Liverpool and was hosted by presenters Clare Balding, Gary Lineker and Gabby Logan. Noel Gallagher's High Flying Birds opened the show and then later introduced the Unsung Hero award with a cover version of the Beatles classic ‘All You Need Is Love’. Dame Jessica Ennis-Hill received a Lifetime Achievement Award and Team of the Year went to the England Women’s Cricket Team.

Whilst Mo wasn’t the bookies favourite, Farah’s athletic achievements are undisputed. He has obtained numerous accolades, including winning 10,000m gold and 5,000m silver at the World Athletics Championships in London this summer, adding to the four Olympic golds and Aerial Camera Systems (ACS) has been there to cover all these great successes.
On a night of surprises, Northern Ireland's World Superbikes champion Jonathan Rea finished second and para-athlete Jonnie Peacock was third.
More information about the nominees, winners and statistics can be found on the BBC website.

ACS Filming at BBC Sports Personality of the Year 2017

Aerial Camera System (ACS) have enjoyed a long standing history in supplying the BBC with our specialist cameras for this popular award ceremony.
This year, working with CTV Outside Broadcasts, an ACS designed SMARThead™ remote head, fitted with and Sony HDC P1 camera and 14x lens, was positioned at the front of the stage. The ACS tracks crew were also on site delivering a 60m flown track with HD Cineflex V14 stabilised mount offering dramatic overhead tracking shots showing the scale of the event and audience.   A 12m ground based track was rigged towards the back of the audience. Fitted with an HD Cineflex V14 stabilised mount this provided smooth tracking shots of the presenters and action from the ground.
Our crew of four who rigged and operated the cameras began the intricate rig the Wednesday before the show and crew finished de-rigging today.
The BBC Sports Personality of the Year awards ceremony filming is another example of the great team work and professional filming services offered by Aerial Camera Systems (ACS).  If you would like to find out more about our filming services, our bespoke cameras or to view our showroom, then please visit our website.