ACS SMARTheads™ at another Royal Wedding 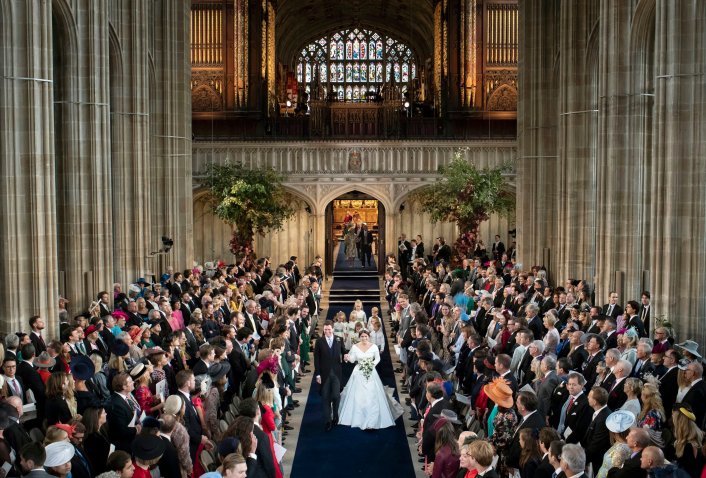 Since announcing their engagement in January 2017, royal fans have been waiting for the moment Princess Eugenie and Jack Brooksbank would exchange vows in St Georges Chapel at Windsor Castle on 12th October. From her stunning wedding dress and family tiara, to the star-studded guest list, Aerial Camera Systems (ACS) were there to capture the Wedding celebrations in the Chapel.

ACS Filming at the Royal Wedding

ACS SMARThead™ remote heads with specialist crew provided the coverage of the wedding ceremony in St Georges Chapel for the second time this year having supplied the majority of the camera positions for the Wedding of the Duke and Duchess of Sussex in May.
A total of 19 SMARTheads™ were rigged by a team of 10 specialist technicians and operators. All SMARTheads™ were fitted with Sony P1 HDC cameras and canon lenses. Rigging for the event started on the Monday with rehearsals in the days before.
Fortunately, the majority of planning and site surveys had already been completed with the earlier wedding of Prince Harry to Meghan Markle a few months previously, which enabled similar camera positions to be used for this second Royal Wedding of the year.
The Royal wedding was filmed live from the Chapel and televised for royal fans to watch at home. It was broadcast on an extended episode of ITV’s This Morning and watched by an average of three million people, giving the channel its best ratings for the timeslot since William and Kate's marriage in 2011.

Art-loving Princess Eugenie, is the Queen’s granddaughter and is ninth in line to the throne. She is also cousin to Prince William and Prince Harry. Born in 1990, Princess Eugenie Victoria Helena of York is the younger daughter of Prince Andrew and Sarah Ferguson, Duchess of York, and the sister of Princess Beatrice. Jack Brooksbank, is a 32-year-old drinks executive. Princess Eugenie had been dating Jack for around eight years, since meeting in 2010 when they were introduced through mutual friends.

The couple took their vows at St. George’s Chapel in Windsor Castle. The (quite windy) autumn wedding, was aptly decorated with autumnal floral schemes. The bride looked radiant in a beautiful white, V-neck gown by British-based Peter Pilotto. The dress was embellished with the couple’s meaningful symbols of Shamrock, Rose and ivy, and was finished with a full length train.
Princess Beatrice was the maid of honor. Princess Eugenie also selected Princess Charlotte, 3, as one of her bridesmaids and Prince George, 5, to be a page boy for her nuptials. Their cousins Mia Tindall, 4, Isla Philips, 6 and Savannah Philips, 7, were also bridesmaids.

Who attended the Royal Wedding?

Celebrities including Robbie Williams, Demi Moore, Naomi Campbell and Cara Delevigne were among 850 guests in the chapel as the pair exchanged vows.
1,200 lucky guests were selected to experience the festivities from Windsor Castle grounds. They were able to witness the guest arrivals, listen to a live broadcast of the ceremony and watch up-close as the couple stepped out for their first appearance as newlyweds. There were also representatives from charities the couple supports, students from local schools, Windsor Castle residents and members of Royal Household staff present.
After a traditional ceremony, during which the maid of honour, Princess Beatrice, delivered a reading from The Great Gatsby, the couple kissed on the steps of the Chapel to cheers from well-wishers. The newly married couple then took a short carriage procession through part of Windsor High Street.
Aerial Camera Systems (ACS) were delighted to have played a part in this historic occasion. If you’d like to find out more about the cameras and crews used for live filming of the Royal Wedding, or to find out how we can enhance your next filming project, then please get in touch.